Almost every [carving] made me imagine the people from the surrounding neighborhoods walking into the park, whether it be kids drinking, smoking and hanging out, or lovers taking a stroll. I found the faceless initials carved on the trees and what might be the story behind them to be most interesting. – Mary Reilly 2014

New York, NY (CHELSEA) Garvey|Simon Art Access is pleased to announce Graffiti Trees, a new solo exhibition of drawings by American artist, Mary Reilly. This will be Reilly’s 6th solo show in New York and her second at Garvey|Simon. The exhibition will run from January 8 – February 7, 2015. The opening reception will take place on Thursday, January 8, from 6-8pm. The artist will be present.

Working in both powdered graphite and lead graphite on paper, the artist memorializes tree carvings or “graffiti” found within the woods of Alley Pond Park, Queens. The imagery in these new drawings continues the dialogue Reilly pursues with urban life and nature via the discovery of oft-forgotten, secluded spaces in the parks and other outlying sites within New York City.  Time spent in the “ancient growth forests” of New York – specifically Alley Pond Park, sparked this new body of work.

Reilly elevates the gnarled bark and scarred trees into something silvery and timeless. Each carving is different and speaks to its own unique history. Reilly describes walking through the woods as if it were a trip back in time. Each carving creates a narrative in her mind of the people that left them. Some are romantic in nature and most likely left by lovers, while others seem left by people hanging out in groups. Reilly selected her favorite imagery from each category to create homage to these anonymous small crimes of passion, which nature seems to have endured without pause.

Working both on large (50 x 40 inches) and smaller scale drawings, Reilly uses an intensive layering technique to prepare her paper. Powdered graphite is repeatedly pushed into the paper (sometimes over a number of days) until the right tone is achieved. From there, both additive and reductive techniques (erasure) are used to masterfully render her subjects. The photographs she has taken on her journeys are her main source material, but she edits her subjects to reflect the exact memory, mood and light she associates with each specific place.

Mary Reilly (b.1963 in Yorktown, New York) studied art at SUNY Purchase, the School of Visual Arts, the Art Students League of New York, and the National Academy School of Fine Arts. After a career as a graphic designer, she began pursuing her career as an artist full time and studied with artists Frederick Brosen and Sharon Sprung.  Her work is included in the permanent collection of the New-York Historical Society and has been exhibited at The Museum of the City of New York, The Arsenal Gallery in Central Park, The Arkansas Arts Center, the National Academy of Design and numerous other venues. She currently lives in Stowe, Vermont.

Check out the opening reception held on January 8, 2015 HERE. 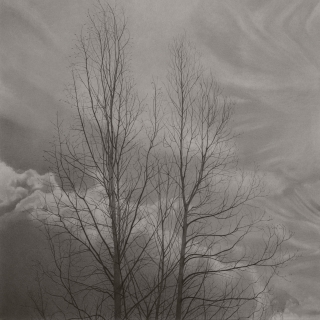